Digital Ownership has been a controversial matter if NFT is kept out of space. Game skins, tokens, and other collectible items bought through microtransactions give the users a sense of ownership. But in reality, those digitally bought items belong to the original publishers, it could be due to the centralized nature of the business.

For example, Gamer 007 plays competitive COD and has bought a dozen rare in-game skins and collectible items. For the time being, Gamer 007 owns the digital items because he/she paid for them. What happens if that game shuts down or loses its player base completely? What happens to those items? Does the owner or gamer profile get it? Does he/she get a refund or compensation? No! It’s lost forever. This very problem is fundamentally tackled by NFTs.

As NFTs are based on the decentralized blockchain network, there’s no single entity with the majority of ownership. It’s all distributed. Decentralization was the reason crypto became so prominent today, to break away from the central authoritarian structure.

We have always believed the pioneer of NFT is Crypto Kitties because it introduced an idea where collectibles are digitally owned via smart contracts. Theoretically, it means that if Crypto Kitties is to close its business tomorrow, you wouldn’t lose your ownership of the asset.

In the last couple of years, the NFT market has erupted into a $432 million industry, which is a positive sign that people are embracing it with such warmth. But, few critical issues need fixing on a much larger scale and only a handful are trying to address them. 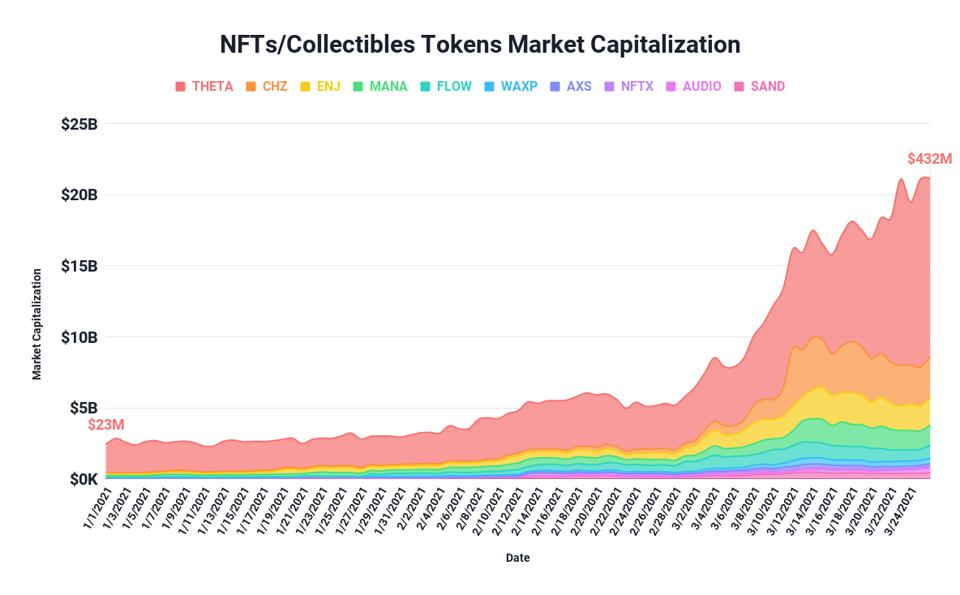 Low Liquidity –  Understand this with an example

For example –  Tony wants to sell a car for $5000, the most obvious asset that it can be exchanged here for is the cash, right? Steve doesn’t have the cash and instead offers a Gauntlet having the same value as $5000 in exchange for the car, Tony might not want to do it.

2nd. Tony cannot wait, and Steve must buy the car at the earliest. So Steve decides to sell the Gauntlet for a lower price to Natasha because a match for the correct value couldn’t be made.

Here, in this example, Gauntlet is an asset with low liquidity.

NFT requires complex smart contracts to be executed, compared to a normal crypto transaction. This causes gas fees to go higher in order to process that smart contract over the network which takes more space in the blocks.

Robert Martin, a guy who tried buying an NFT on Rarible that cost $30, had to pay $200 for the gas fee. The high gas fee stops many NFT users from buying or selling.

Each NFT is unique. They don’t have the same value so it cannot be exchanged like other assets which cause scarcity, making the NFT less liquid. ERC-721 tried solving a lot of things but Interoperability is far from being normal at this very moment.

Why We Created a DeFi Platform Based On A Mythical Creature?

The founders were fascinated by Werewolves and the myths surrounding them. So we decided to bring the myth and connected it with the Decentralized Finance ecosystem consisting of a Decentralized Marketplace, Decentralized Asset Management, and Gamification for Werewolf Assets.

Because at the moment, DeFi is the next big thing, and if you add NFT to this equation, Boom! A look at the Market cap of DeFi shows exponential growth in just over a year.  And if you do a side-by-side comparison with NFT Marketplace, the picture tells another astonishing story. 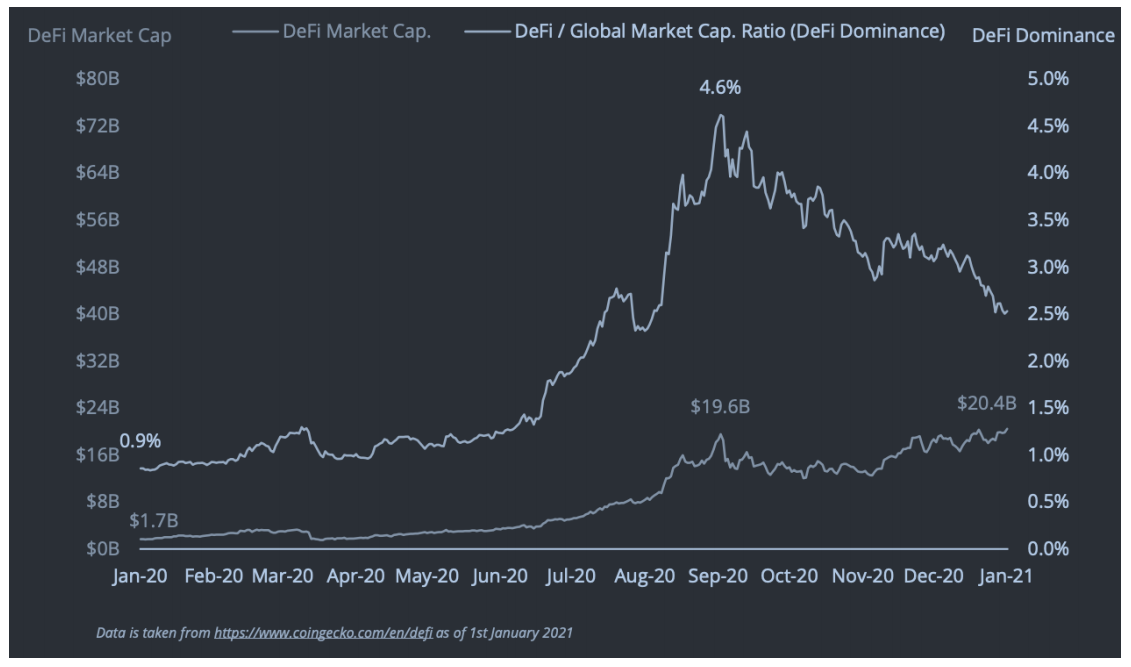 For Werewolf Exchange, having a defi based ecosystem has great benefits: It tackles all those problems like High Exchange fee, Interoperability, and Liquidation.

Liquidation – is a key aspect of any market and without it, it’s the wild west out there. Automated Market Maker is one solution especially for the projects or exchanges based on the Sale Mechanism model. It also helps in deciding the price of the token as value is decided through a public offering in the open market. More on IBCO later…..

“There’s always more than enough balance in the reserve of our Bonding Curve Contract. This helps facilitate accurate amounts of tokens to the buyers in exchange for Ethereum. On the other hand, when tokens are sold, the contract takes the current selling price of the tokens into account and sends the user the correct amount of Ethereum.”

Since the bonding curve is acting as an automated market maker (AMM), tokens can be bought or sold at any time giving it instant liquidity. This is made possible by the bonding curve contract holding more than enough Ethereum to perform as the transaction counterparty, and buying back the WOLF tokens from the seller. Meaning there’s continuous and constant liquidity.

High Fee – On our exchange, the fee is a little higher, up to $2.5 on each transaction. But our exchange uses that fee to incentivize those who hold Werewolf assets. So more and more investors want to hodl their position and earn incentives on the network.

“In Werewolf Marketplace, users can also use Ethereum or WWC (Werewolf Coin) and get NFTs in return. These tokens represent a unique value. NFTs could be used to represent these items and make them easy to store on a wallet, less expensive to sell and trade on an open market.”

Now coming to the gamification part of Werewolf Exchange:

Why A Virtual World of Werewolves

There are projects selling virtual lands, we have Crypto Kitties selling virtual cats, so we thought why not a whole world full of Werewolves. By gamifying werewolf assets, we’re giving NFT enthusiasts a new exciting way to get involved that’s not boring.

Our game will engage the community with their participation. They can buy Werewolf NFTs and rule territory. Stake their asset into our Full moon pool and earn rewards. 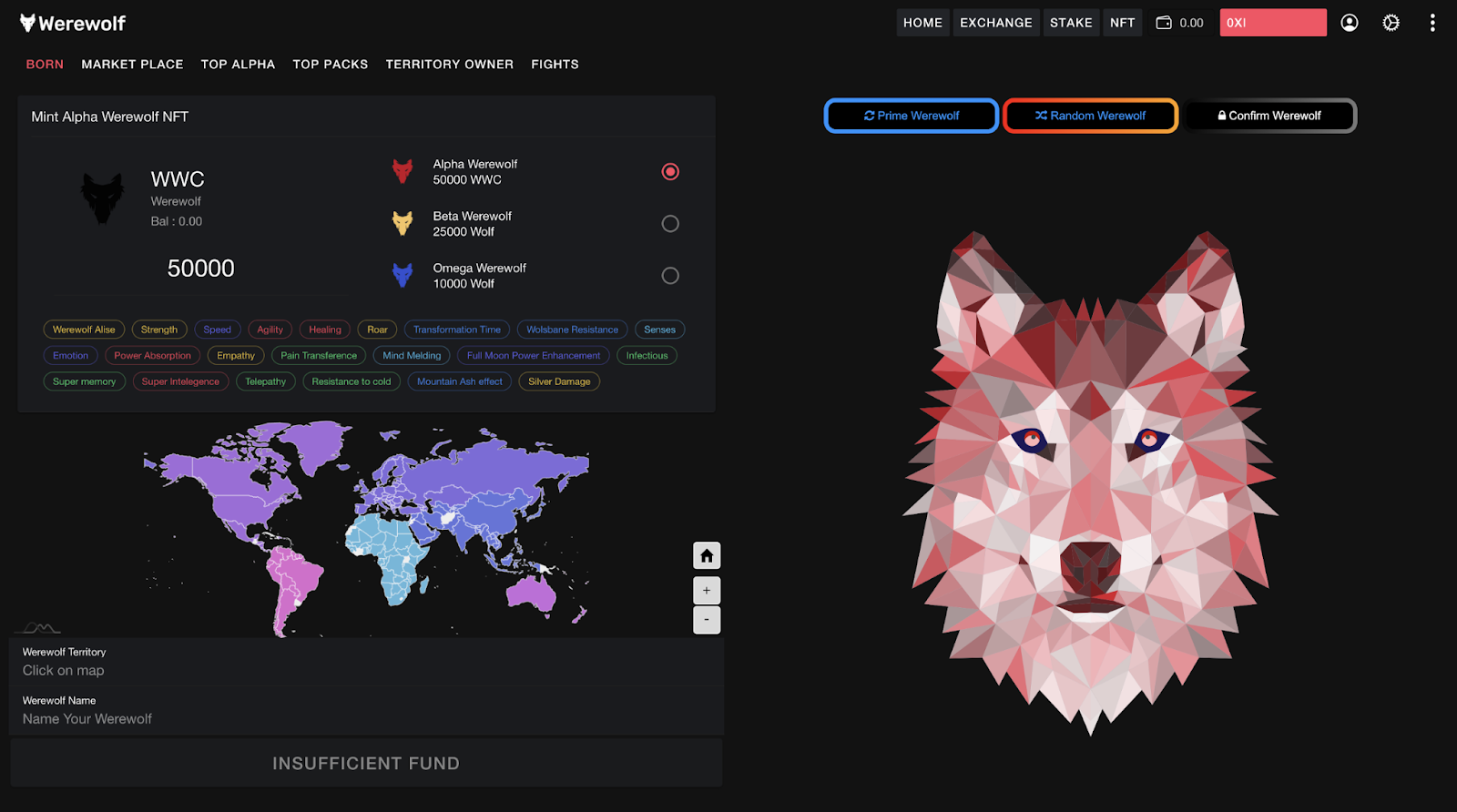 The gaming platform is a virtual version of our real world and is divided into territories/states. The territories are occupied by our three Werewolf Assets: Alpha, Beta, and Omega.

Each territory is led by Alpha Werewolf Asset. Alpha is the leader of a territory that is followed by a pack of Beta werewolves. While the Omega is the outcasts or loners, owing no allegiance to any territory or the Alpha.

Things get interesting as one territory cannot be ruled by more than one Alpha, a user wanting to gain control over another territory will have to fight the Alpha hodler of that territory. Whoever wins gets the opponent’s territory and the betted token.

“Shortly after we announced our NFT, people successfully managed to mint 2 Alpha and 2 Beta Assets in different territories.”

The Werewolf platform is a digital version of the world where Alpha owns the territory and is the most dangerous out of the three. The number of Alpha is parallel to the number of territories. 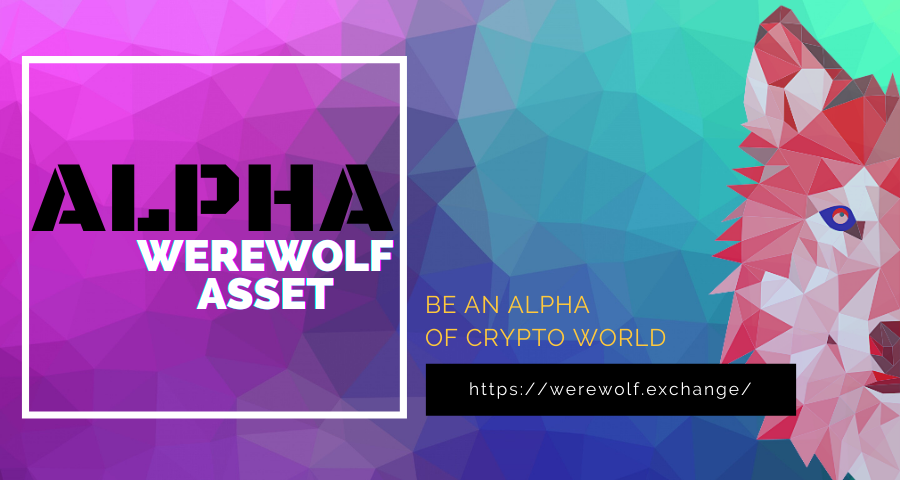 The followers or the members of the pack that Alpha leads. If a beta Werewolf is born in a territory, it will be automatically assigned to the Alpha of that area. Betas are not as powerful as Alpha but they are stronger than Omegas. 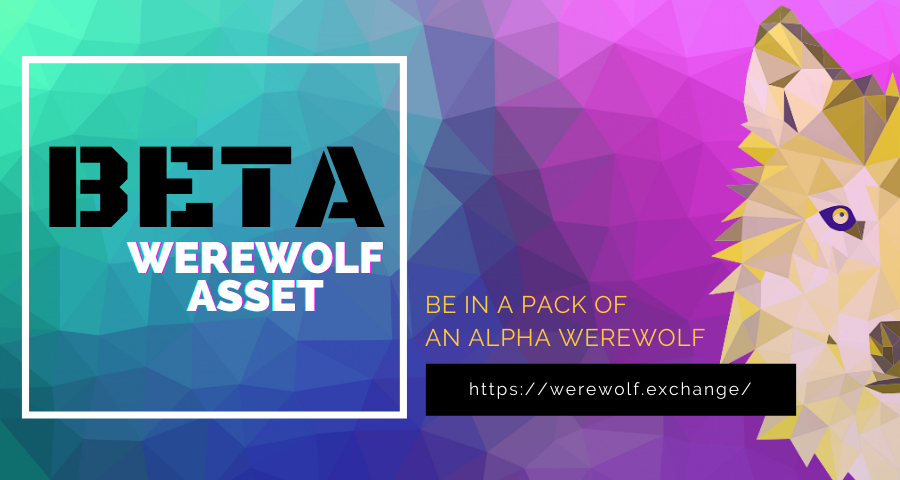 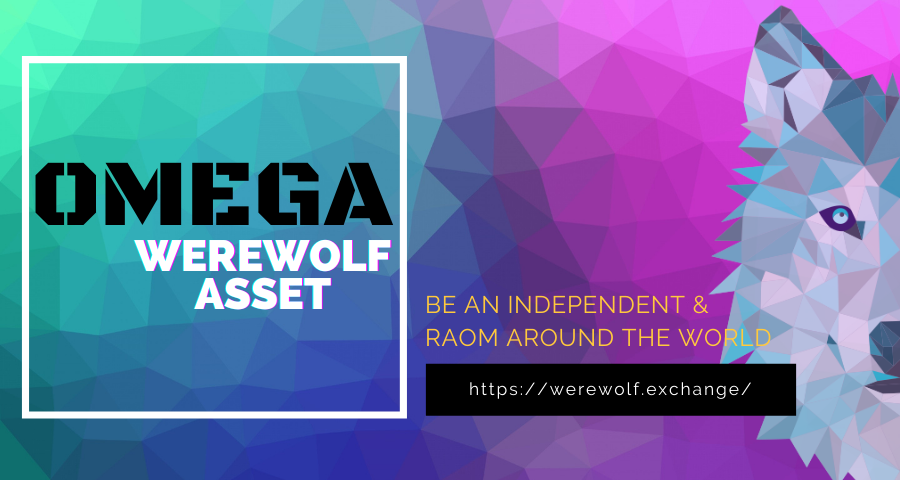 In January 2021, we made our ERC-20 WOLF token sale public via Initial Bond Curve Offering was announced, starting the tokenomics of the entire project followed by our whitepaper.

The IBCO enables participants to use Ethereum as a form of currency to instantly buy Wolf Token on Werewolf Exchange, which gets deposited in the wallet instantly and acquires governance over the Decentralized Finance ecosystem. The token works just like any other where increasing demand causes the price to increase as well. Meaning each next buyer will have to pay slightly higher prices for the token. In simpler terms, as more interest builds up leading to more investment, the value of token progressively rises along the bonding curve.

It helps with liquidity as there are always more than enough in reserve that users shouldn’t be concerned about their locked liquidity.

The buying and selling price of the tokens rises and falls in correspondence with the number of tokens minted and burned.

“We are focusing on launching an Exchange where people can trade their WWC with other Crypto Tokens, and also building a gaming platform where NFT holders can fight with other NFT holders over ownership of Territory as well as getting hold of oppositions Werewolf assets which they used in the fight. We also aim to build Werewolf Payment Gateway and Werewolf Auth in which people can use Werewolf NFT as a Login service. Last but not the least, eCommerce Platform is also on our list. Our developers are working hard to make it possible by the end of the year 2021.”

In March 2020, DeFi transactions were evaluated to be around $2.2 billion. A year later, that market cap has reached $68billion during mid April, showing a growth of a stunning 31000% (according to Moneyweb). Some of the best names are Aave, Maker, Uniswap and more.

Our DeFi exchange that is to launch in the second quarter of 2021, will help us and our users achieve the freedom to buy and sell or stake their holdings. This in turn will further the liquidity as the tokens locked for staking can be used for lending or other token-based activity. Those who stake coins or tokens on our network are equivalent to network participants.

DeFi craze is rising and having no involvement of regulators is the cherry on the top. At the moment, DeFi is estimated to have over $59billion locked, an increase of over $17 billion in just a month. Big financial institutions are jumping in as well embracing Defi. Sentiments are changing and people who this, they don’t want to miss out. #FOMO.

As a team of developers, we wanted to create an innovative way to bring in more DeFi enthusiasts, hence Werewolf Exchange. It delivers a secure and convenient way to create or trade NFTs, buy or sell anywhere in the world.