Everything has an origin story, even 3D. The intriguing part for The Fabricant was that it was a mystery to us until we took a deep dive into 3D’s history to satisfy our curiosity. Which is how we became acquainted with the non-conformist brilliant mind that we owe everything we do as a digital fashion house.

You might assume the founding architect of multi-billion dollar industries in cinema, television, aerospace and medicine, to name a few applications of 3D imaging, would be a well known name by now. But it just isn’t so. The conclusion we drew is this is because the inventor of 3D imaging is a woman, and also a woman of colour. And a scientist whose brilliance is equally weighted with modesty.

So today, on her 78th birthday, as a 3D tech company whose staff is made up of over 75 percent women, The Fabricant would like to honour Dr. Valerie L.Thomas, the NASA scientist and inventor without whose capacity to transform ideas into groundbreaking technology, our work and industry would simply not exist.

As a child in the US of the 1950s, Dr.Thomas’s interest in mechanical systems was sparked by observing her father fix a broken television. Her instant curiosity was discouraged, so at the age of eight she took matters into her own hands by reading a book not intended to speak to her gender, The Boys First Book on Electronics.

The pattern would repeat itself throughout Dr.Thomas’s schooling: a lack of support and encouragement to pursue STEM (Science Technology Engineering and Mathematics) was something she continually fought against. But her resilience in the face of persistent challenges paid off and she would go on to study Physics – one of only two women to do so at her university.

Clearly a force to be reckoned with both scientifically and personally, in 1964 Dr.Thomas was offered a job at NASA as a data analyst. Here she worked her way up to associate chief of the team creating NASA’s Landsat programme, the satellite technology which maps Earth from space and has to date recorded over 8 million images of our planet.

Dr.Thomas’s hunger to learn and innovate remained undimmed despite being at the top of her field. After attending an exhibition that included an illusion of a lightbulb made possible by the use of mirrors, she began research into how light and concave mirrors could be used in her work at NASA. The project led to her inventing and patenting the Illusion Transmitter, the founding technology for 3D imagery. Her creation allowed real-time 3D viewing of objects through the use of parabolic mirrors, and is still in use by NASA today.

Dr.Thomas’s achievements are inspirational, but there’s an aspect to her story that continues to resonate. While many of the social attitudes she pushed against have thankfully evolved, a jarring truth remains: Women are still underrepresented in STEM subjects and consequently, within the tech industries as a whole. Statistics by Pew Research Centre reveal some uncomfortable insights:

The need for diversity in tech is a no-brainer. Our world is deep into the process of being digitally shaped and our virtual existence is being defined by a limited demographic, without input from full spectrum teams with a broad range of life experience. In a startling example from 2018, Amazon scrapped the AI recruitment tool it was using because it treated any mention of the word ‘women’s’ as a red flag. Using machine learning, the algorithm decided that male candidates were preferable and downgraded candidates from women’s colleges. 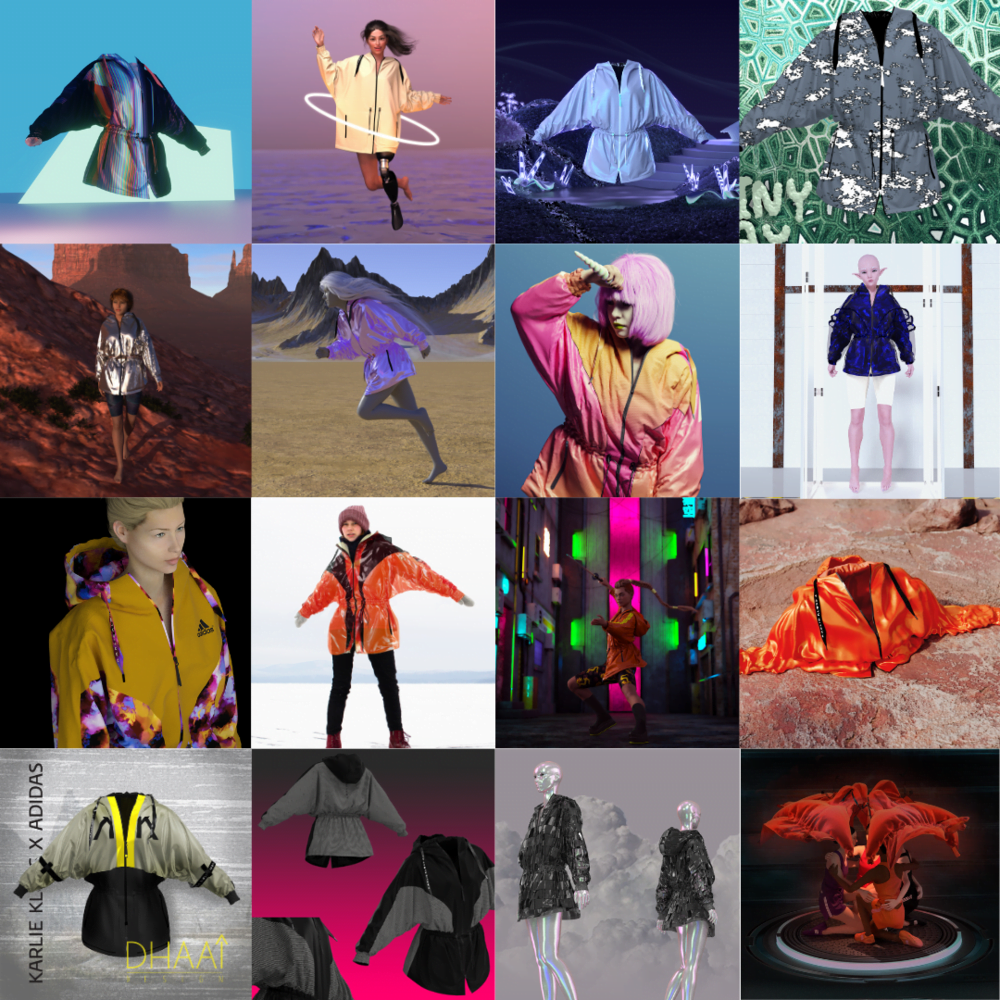 Image: A selection of images by 3D creators submitted to the #makingstrides competition

One of our collaborations, the #makingstrides initiative, recognises that positive interventions are required to redress tech’s currently skewed gender dynamic, and as a new tech-driven industry, the world of digital fashion has a part to play.

#makingstrides takes the form of a competition. Devised by The Fabricant alongside Adidas and Karlie Kloss, its purpose is to elevate womxn in tech through interaction with 3D digital fashion. Kloss, whose organisation Kode With Klossy organises free coding camps for young girls, is a longtime advocate for the need to inspire women to pursue STEM and participate in tech-centric environments.

#makingstrides asks upcoming 3D artists, of all genders, to create an interpretation of a piece from the Adidas x Karlie Kloss collection, with the intention to magnify their visibility and fasttrack their entrance into the innovative world of 3D digital fashion. Guidance comes in the form of a series of free webinars hosted by The Fabricant. And as well as cash prizes, 20 selected finalists will have their designs showcased and uploaded to blockchain, enabling them to make revenue from their creativity.

To quote one of Dr.Thomas’s fellow scientists the fabled physicist Isaac Newton who formulated the laws of gravity:

“If I have seen further it is by standing on the shoulders of giants.”

The Fabricant has the privilege of building a digital fashion industry that stands on a foundation laid by a woman who pursued her immense talent despite the numerous obstacles in her way. The least we can do in return is to try level the playing field for those following in our footsteps, and continue to pass on our passion for the 3D technology that she strived to create.

Discover more about Dr.Valerie L.Thomas and her groundbreaking work HERE: