Envision being an artist, for a moment. Whether your niche is digital art or creating a physical piece, you create stunning visuals for others to enjoy. One of the most important elements in creating art is protecting your work from being duplicated without your authorization.

Especially with digital artwork, there is always the possibility that the image will be replicated multiple times and distributed, essentially diminishing the value of the piece and destroying that precious element of rarity, because what was once a single piece of original work has been multiplied by others, rendering it as common.

Crypto art has emerged fresh on the scene, an aesthetic in its pioneer, and it offers a solution to the threat artists face when their artwork is copied by unauthorized parties, which causes their work to depreciate in value. In a nutshell, crypto art is Bitcoin in the form of art.

“Crypto art is basically art (usually, but not always digital art), that is given a unique signature on the blockchain which confirms that it is original and limited in quantity  — just like original artworks and photographic prints which have been signed. It is then sold or auctioned for cryptocurrency and then transferred to the buyer, so they own a totally unique and verified original artwork.”

It isn’t different from traditional forms of art, in the sense that you would pay an artist if you desired to own the original work. Oftentimes, there might exist more editions of a piece, similarly to photographic prints, and sometimes there could be 1/1 editions like in the case of oil paintings. The only difference is the digital signature. This means crypto artists can now sell their work in a way that they can control.

Pursuing the traditional art market ostensibly comes with certain disadvantages, especially for obscure or unknown artists. The creation of artwork can be a slow and tedious process. Artists also have to think about all the necessary components involved in an exhibition, which requires time and resources, in conjunction with a gallery willing to showcase the artist’s work.

Disadvantages increase when showcasing is limited to a gallery’s time-slot such as their hours of operation. Artists may never see immediate results from their work, not when it can take years for their work to reach the market.

Unlike conventional pieces of art, crypto art has a unique characteristic, which makes it unlike anything that came before it. Each piece of crypto art has an exclusive indelible identifier — a digital signature, similar to a copyright or an encoded watermark, which is not visible to the naked eye.

This exclusive signature is then used to identify, verify, and track its history on the blockchain, allowing for the art piece to be inalienably connected to its unique signature and etched into the blockchain’s immutable digital public ledger. This is called “tokenizing” or “minting.”

My next trilogy will be ‘Cult Classic Movies’

What kind of style would you like to see for it? pic.twitter.com/kftV1JVMuU

What this means is the original piece will continue in its original, rare form and can appreciate or depreciate in value because each piece is essentially a non-fungible token (NFT), which is then used to constitute verifiable digital scarcity and digital ownership. While online pirates can still take screenshots of the work, download it or upload it for others to copy, unauthorized copies do not retain any value. So, while the image can still be pirated, it will not carry with it the monetary value that the piece holds.

“Also, often buyers buy art since some art will increase in value as opposed to normal currencies, which generally lose value over time. So it’s a good investment. This is also why crypto artwork is called Non-Fungible Tokens. They represent a unique digital item, rather than Fungible Tokens which represent something that has a set value and can be exchanged,” said Attfield.

Similar to traditional forms of art, a person or people can have ownership of variously signed reproductions of the artwork, if the artist has released multiple editions. “But if it’s a 1/1 edition it can only be owned by one person (or a group,  for example an online gallery) at the same time,” Attfield further explained and added:

“Crypto art is new and unexplored. I love that it allows people from all around the world to connect over their common love for art. It also makes it easier for artists to find an audience because there are so many people with diverse interests.

Attfield discovered crypto art nearly two years ago, joined then, uploaded some artwork, and then pretty much forgot about them. “Recently, one of the artwork got an offer, and I then started uploading some more of my artwork, and it just took off! It was such a wonderful experience to have people offer me money for art that I made because I loved it,” she said.

One of the things that new and exciting innovations has a tendency to attract is drawing like-minded individuals together. Since the discovery of crypto art, its popularity has brought communities together from all over the world — artists who have never had the opportunity or the platform to converge and celebrate their love of art, who likewise have an open invitation to anyone.

“It’s a way to connect with people all around the world and it’s a way to share your art with a wider audience,” said Attfield.

‘Rusalka’ is now up for bidding on @SuperRare_co. This one took a while, but I’m very happy with the result!

Rusalki are water spirits from Slavic folklore. This particular one is friendly and waters the crops of farmers who live nearby her river.https://t.co/WdaBKp1ow3 pic.twitter.com/SUkNXF8orN

While this new global community may appear at first glance as utopian — even egalitarian like any place in cyberspace — it attracts a broad and diverse membership base, oftentimes with counter agendas of an offensive nature. As with the culture of the Internet, such people with their loud and raucous personalities sometimes create obstacles.

However, apart from the usual loud Internet personas that seek to ruffle feathers and cause waves, the crypto art community is ostensibly welcome and resourceful to everybody with an interest in the subject.

BeInCrypto also interviewed a crypto artist, who goes by the pseudonym PR1MAL CYPHER, who studied philosophy, linguistics, psychoanalysis, and art in the cities of Innsbruck and Vienna, Austria.

As far as art is concerned, he started in the field of oil painting, but during the beginning of 2020, he gravitated over to the crypto art and the NFT scene. Having been influenced by Vaporwave and Outrun art, as well as growing up being influenced by the cyberpunk sci-fi subgenre, ended up attracting him to things like cypherpunk and the hacktivist group Anonymous, including blockchain technology. 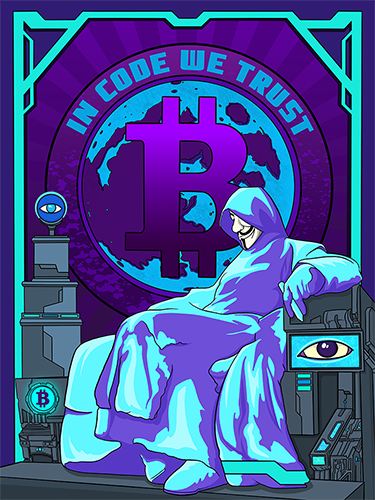 He discovered a bridge between the present in its technological innovations and ambitions to various scenarios concerning the hypothetical future of humankind, which, in his words, “will be significantly influenced by technology.”

When asked what crypto art is in his own words, PR1MAL CYPHER emphatically responded:

“Crypto art is — in my opinion — an ART OF RESISTANCE; born from the roots of the cypherpunks, who fought and still fight for an open Internet, more transparency, more privacy, freedom, and decentralized networks.”

“Bitcoin as one of the essential developments that sprang from this spirit, questioning monetary systems with its underlying ideology, is in a sense a starting point for crypto art,” continued PR1MAL CYPHER, adding:

“Thus, this art movement is not simply about the new technical possibilities of blockchain and associated security against manipulation, transparent price developments, and ownership, as well as, among other things, the programmability of art, but ideologically speaking, about a resistance that specifically attacks oppressive centralized systems, institutions and interest groups, and propagates alternatives. Of course, crypto art also includes the aspect of a community that revolves around cryptocurrencies and their memes.”

Furthermore, he generously explained what attracted him to crypto art. Aside from the advantages of NFT art, he said: “Shortly after I found out about the advantages of tokenizing art, I was immediately excited. Anti-counterfeiting, price and ownership history, programmability, and everything else that blockchain technology and its new platforms bring with it, I immediately saw it as a wonderful addition to artwork. I saw in it the possibility of a small and decisive revolution in the art world.”

PR1MAL CYPHER went on saying: “I knew relatively quickly that I wanted to create more works in this context. Quite frankly, I fell in love with crypto art and the whole scene quite quickly.”

During the interview, he explained how artists can benefit from incorporating a token to their art pieces. From his perspective, this “depends entirely on the artist,” as well as the kind of media being developed by the artist and their level of creative prowess. PR1MAL CYPHER said:

“The general advantages lie in a certain protection against forgery, i.e. in a verifiable origin, since the artist, his work, and all relevant information are stored unalterably on the blockchain and cannot be edited. If the work is sold, the buyer, as well as the price are transparent, which also applies to all buyers who purchase the work on the secondary market.”

According to him, “through various developments, such as the ASYNC platform, it is even possible to expand the participation of buyers directly in the artwork, which has a massive impact on the final result in terms of how the work is represented.” 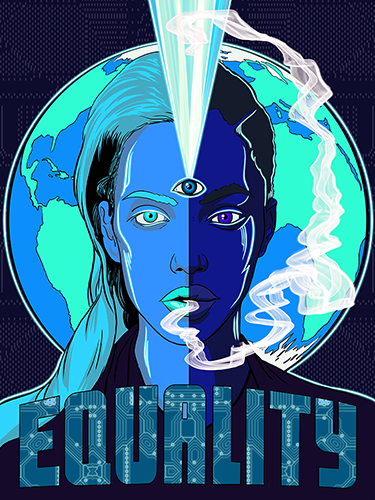 The amount of enthusiasm surrounding the crypo art scene is a matter of intrigue. But what drives these crypto artists, who have also become such strong advocates in support of this new proliferating subculture?

“To put it briefly: an inner creative force. It does not play such a big role for me, which medium I use. Sure, oil painting is my great love, but also writing, digital art, drawing and much more,” stated PR1MAL CYPHER.

According to him, it is important to transport certain contents — be it values that are important to him or things that he is convinced are important in the context of a higher good. In other words, transposing some fundamental aspect of himself on an innate level and trying to capture it in the creative element that goes into his artwork is his goal.

With this in mind, he develops works that he hopes will interact with the viewer on what could be described as the “soul-level” — to project a reflection of himself through his works.  PR1MAL CYPHER shared:

As the interview came to a close, PR1MAL CYPHER offered a final thought for the individuals who encounter crypto art for the first time in their lives: “Read. Learn. Immerse yourself in a heterogeneous community and exchange ideas. This community has a lot to offer; ingenious minds and creators who, with different projects, build an ecosystem that takes art to a new level. But the scene is only at the beginning. A new era of digital art.”

The post Crypto Art: Ecosystem That Takes Art to a New Level appeared first on BeInCrypto.